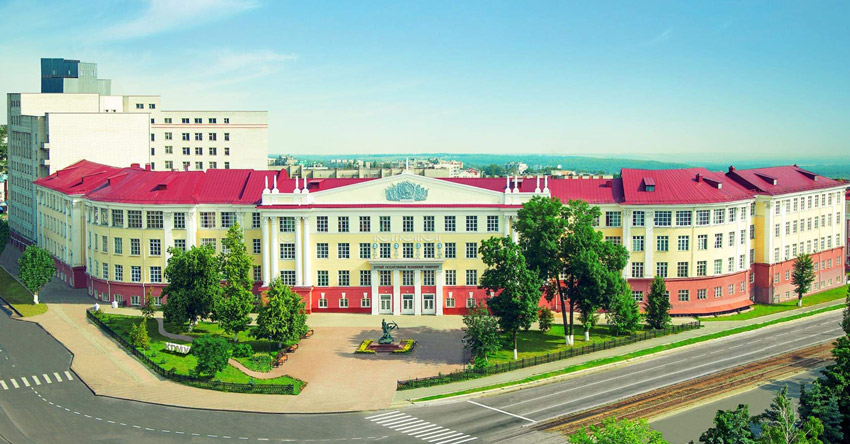 Kursk state medical university was established in 1935 by order of the Council of People’s Commissars No 89 dated 9 February. The ﬁrst director of the medical institute was appointed physician V.I. Deshevoi. In 1954 the institute was qualiﬁed for training academic staff through postgraduate training programs for the ﬁrst time. By 1955 there was completely restored the academic building, were built two student hostels, a building for the department of physical education, equipped a sports hall, and a dining room and the library was expanded and enriched. The institute grew and developed, having overcome difﬁculties of wartime successfully: the material and technological base strengthened, research and clinical basis were expanded and academic activity constantly improved. In 1985 Kursk state medical institute was awarded an order of the Red Banner of Labour for merits in the training of physicians and pharmaceutists and contribution to the development of public health service and medical science.

Kursk is a city and the administrative center of Kursk Oblast, Russia, located at the confluence of the Kur, Tuskar, and Seym rivers. Kursk was originally built as a fortress city, on a hill dominating the plain. The settlement was surrounded on three sides by steep cliffs and rivers. From the west, the Kur river, from the south and east, the Tuskar river, and from the north, forest thickets approached it. By 1603, Kursk had become a large military, administrative and economic center of a vast territory in the south of the country. The new fortress was built under the leadership of the governor Ivan Polev and Nelyub Ogaryov. The Kursk fortress was given a particularly important role, since in these places the Crimean Tatars, who made regular raids on Russia, traditionally crossed the Seym river, and their main road, the Muravsky Trail, passed east of the city. In this regard, Kursk, despite not being part of the Belgorod Protection Line, became one of the most important fortresses in the southern region. The importance of the Kursk fortress is evident by the fact that in the first half of the 17th century it significantly surpassed other cities in southern Russia in terms of the number of people. The bulk of government buildings was built at the end of the 18th century.

At the beginning of the 19th century, construction was carried out insignificantly: offices were repaired, a new prison was built, and almost half of Kursk's streets had stone pavements, along which storm sewer grooves were laid. The streets were named Sergievskaya, Tuskarnaya Naberezhnaya, Staraya, Novaya Preobrazhensky, General's line, Soldier's, Druzhininskaya, and Pastukhovskaya. Zolotarevskaya, Avraamovskaya, and so on. On July 10, 1808, five settlements (Sloboda) of Kursk became part of the city. The settlements surrounding Kursk became part of the city only after 1917. The Kozhevennaya Sloboda disappeared from the city plan by the 1940s. The layout of the settlements was as regular as in the provincial center. Urban pasture land was located between the Seim River, on the border of the 3rd district of Kursk, and the Big Post Road from Kursk to Obryan. Rebuilding efforts in the city began in February 1944. The cultural life recovered as well: on 19 February a cinema was reopened and on February 27 - a drama theatre. In 1953 the tram system began operating again. By 1950 the urban economy had been completely restored. In 2009, for the first time in 90 years at the site of Theotokos of Kursk, the most revered icon in the Russian Orthodox Church, received the name Hodigitria Russian diaspora. On 29 October 2011, for the first time in 30 years, the city opened a new firehouse for the protection of the Central District, with modern equipment. In 2012, Kursk celebrated its 980th anniversary.

General Medical Council of European countries and other boards.

Duration of the course is 6 Years

*The tuition fee may increase from 2nd - 6th year (6-10%).
*1 USD = 75 Russian Ruble applied for this MBBS fee structure (As per the current situation).
*The amount payable in INR may vary depending on the forex rate.

Edifice team would like to inform you that the exchange rate is extremely volatile and is subjected to change, in such a scenario the fees shown above may differ from the actual price due to a change in the exchange rate and other factors. Candidates are requested to check the current exchange rate before initiating the admission process.

The hostel management is providing a hot water facility in every room on campus.

The students will get 24 hours Wifi facility on campus.

All modern equipment and tools are available to the students at the Kursk State Medical University.

A common kitchen is also available for students who want to cook food.

All the facilities are cost-effective on campus.

The hostel is 24/7 under CCTV security.

Kursk State Medical University is famous for its healthy and vibrant student life. Students can pursue numerous extracurricular activities; various sports events, and multicultural and multinational events. Many student groups function within the university, such as student unions, international students’ unions, student unions by country represented, sports, etc. KSMU provides students with a world-class education in an environment full of new opportunities and ideas, which will help to shape their future. Learning new skills, meeting new and interesting people, and making friends for life; are all standard parts of the university experience, and KSMU is no exception. The campus is a bustling hive of activity and a real melting pot of multicultural cooperation. From sporting events to the arts, Kursk is a center for innovation and culture.

Candidates must have a minimum of 50% (in PCB) or more in their CBSE/ISC 12th results.

Applicants must be 17 years of age at the time of admission.

Marks obtained by you in NEET are valid for 3 years but only for taking admission to MBBS abroad.

Note: Remember no English Language (IELTS or TOEFL) test is required for applying or taking admission

Step 2: Applicants must submit all important documents i.e. scanned copies of 10th and 12th mark sheets, NEET scorecards, a copy of a medical certificate, and a copy of your passport.

Step 3: Candidates will get the invitation letter after 10-15 days of applying for the admission form.

Step 4: After getting an invitation letter students to have to pay the tuition fee of the institute through net banking.

Step 5: With the original receipt of payment and invitation letter from the university, students will apply for the student visa process, which takes 10 days of visa processing.

Official invitation letter from the university

Kursk State Medical University is one of the best leading universities in Russia.

The University offers medical education at an affordable cost for worldwide students.

Kursk State Medical University is recognized by WHO, MCI

The University campus is safe for all students pursuing medical courses.

Medium of teaching the medical course in English as well as the Russian language.

Kursk State Medical University is well-known for its practical training and innovation.

No donation fees and extra charges are required to get admission to the university.

The degree of Kursk State Medical University is globally accepted

Students get training from highly qualified teachers with modern technology.

Cultural and other activities are also encouraged by the university for the overall development of students.

Kursk city is situated in the west part of central Russia.

High level of safety and quality of the urban environment in Kursk city.

Kursk city is famous for its cultural, industrial complex, scientific and educational centers.

Universities in Russia are WHO and NMC-approved.

No donation or capitation fee is required for admission to a university in Russia.

No other entrance test for admission to the university.

The medium of teaching is English and Russian language.

World-class infrastructure is provided by universities in Russia with modern equipment.

Education is provided by trained and qualified staff.

Q. Is Kursk State Medical University MCI or WHO approved?

Yes, Kursk State Medical University is MCI and WHO approved.

What is the minimum age required to get admission to the university?

17 Years is the minimum age required to get Admission to Kursk State Medical University Russia.

Are there any donation charges for admission?

No, there are no donation charges for admission to Kursk State Medical University.

Are NEET and IELTS/TOEFL required for admission to Kursk State Medical University?

Yes, the NEET scorecard is required for admission but IELTS/ TOFEL is not required.

What was the cost of living in Kursk (Russia)?

Is there any airport near Kursk Medical University Russia?

At a distance of 7 km, Vostochny international airport is located near Kursk Medical University Russia.

REGISTER HERE TO GET A CALL from our MBBS EXPERT COUNSELLOR